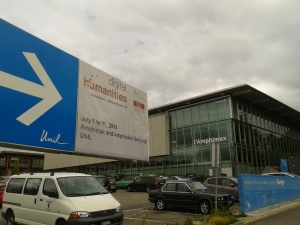 The Digital Humanities 2014 conference took place Monday 7 July 2014 – Saturday 12 July 2014 in Lausanne, Switzerland. (I was lucky to attend and present a poster there). Though there were other hashtags used to tweet about the conference, the main hashtag was #dh2014.

I started collecting #dh2014 Tweets on the 7th of September 2013. Having attempted to collect and reconstruct #dh2012 and #dh2013 archives (and having seen the growth in conference live-tweeting in DH since 2009) I knew the volume would exceed expectations. I broke several Google spreadsheets along the way. In the end I resigned myself to trying to reconstruct an archive for the duration of the conference proceedings, 7-12 July 2014.

I have now shared on figshare an .XLS file containing a dataset of Tweets tagged with #dh2014 (case not sensitive).

The tweets contained in this file were collected using Martin Hawksey’s TAGS 5.1. Due to the volume of Tweets nine Google Spreadsheets were created during the period of the event, which were subsequently refined to four. The data was subsequently organised manually into various sheets, which have been included here.

Sheet 0.  A ‘Cite Me’ sheet, including procedence of this file, citation information,  information about its contents, the methods employed and some context.

Only users with at least 2 followers were included in the archive. Retweets have been included. Data might require reduplication.

Unfortunately the metadata in the sheets for Monday – Thursday is incomplete (the lack of ISO language metadata in these sheets is particularly disappointing, as it would have provided interesting insights); Friday and Saturday do contain the standard metadata available from TAGS.

I was not able to recover these Tweets. Yannick Rochat and Martin Grandjean’s archive has what seems the complete set (available at http://goo.gl/6W3dol; last accessed Tuesday 15 July 2014 11:55 BST). Please cfr:

Please note Rochat and Grandjean’s dataset has 16,903 Tweets, whereas my collection only harvested 16,154 Tweets (749 Tweets less).

The Tweet volume was higher than what the available collecting methods allowed so data is likely to be incomplete. It is not guaranteed this file contains each and every Tweet tagged with #dh2014 during the indicated period, and is shared for comparative and indicative educational and research purposes only.

Please note the data in this file is likely to require further refining and even deduplication. The data is shared as is.  This dataset is shared to encourage open research into scholarly activity on Twitter. If you use or refer to this data in any way please cite and link back using the citation information above.

I'm a lecturer, researcher and editor. I am interested in scholarly publishing and communications, digital scholarship, altmetrics, comics studies, innovation, material culture, journalism, poetry and human rights. You can follow me on Twitter @ernestopriego. View all posts by Ernesto Priego

1 thought on “An Incomplete #dh2014 Twitter Archive (Conference Days Only)”

The original content shared here is © Ernesto Priego and is licensed under a Creative Commons Attribution-ShareAlike 3.0 Unported License. Some Rights Reserved. Third-party content is © its respective authors.

Unless otherwise clearly attributed to third parties, all opinions I share on commentary published here, elsewhere online or on content linked from this site are personal and solely my own. They do not represent the views of fellow citizens, party members, relatives, friends, employers, clients, students or colleagues.

Whenever the pronoun "you" appears on writing published here it is used impersonally and needless to say it does not mean *you* personally. ;-)

Indeed, it's kinda sad I need to add most of the disclaimers above, but there you go, we live in interesting times.

Thank you for reading.