Euan Adie from Altmetric has published a very interesting article with insights into a dataset of Nature Communications articles published between October 2013 and October 2014. I uploaded an edited version of his set as a spreadsheet on figshare.

Open access articles, at least those in Nature Communications, do seem to generate significantly more tweets – including tweets from people who tweet research semi-regularly – and attract more Mendeley readers than articles that are reader pays.

I took his dataset from figshare and opened the .txt file using Excel. Using filters I deleted the 2013 articles and only focused on the ones published between January and October 2014. I sorted them by month of publication from January to October and separated them into two sheets, one for the open access articles and another one for the paywalled ones. This way one can use this spreadsheet to access the open access articles without having to sort through the paywalled ones. Or one can just do an individual analysis per type of access. This is of course super rudimentary data refining (if it can be called that), but it helped me to focus on the differences between access types published this year.
The resulting edited file has two sheets organized by type of access and month of publication, including only articles published during 2014.  (Note: seven (7) records appearing incorrectly as published 1900-1 under the month column were removed. They had no online mentions).

Manual manipulation of the original data was performed so all data should be contrasted with the original source cited above.

The intention of sharing this edited file is to aid in focusing on the open access and paywalled outputs published between January to October 2014 as provided in the original dataset. Having a smaller dataset organized by date and type of access may make quick visualisations easier. 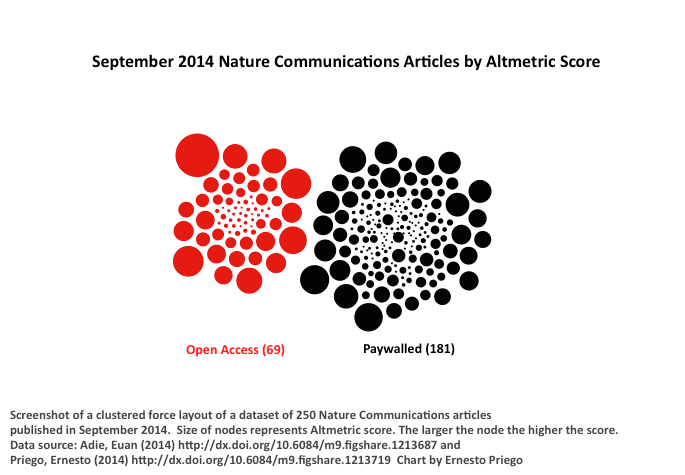